Once upon a time there was a handsome young man who was about to marry the love of his life. Throughout the land there was a call brought forth. A certain broadcasting company was seeking participants in a show, people who were willing to share their big day with the nation. The handsome man thought ‘aha, why not?’  For his classmates were already recording the wedding with many cameras, and the love of his life thought ‘t’will be a little risky, but why not?’ for she knew there was a certain cuteness factor to the wedding, with a whole class of children participating by singing in the ceremony.

And thus they filled out some forms and sent them away, to then be chosen to appear on that particular show. The company saw the appeal of the many cameras already, and the cuteness of the children. But, within a short amount of time it appeared that what the company really began to focus on, what they wanted to shine a bright spotlight on, was the fact that the wedding night would prove to be the handsome young man and the love of his life’s first joining of the hearts. Forsooth!

Yep. That there story is true. Many, many years ago my Spunky Hunk of a husband and I, were the couple above. We had tv cameras follow us around in the build up to our wedding…..dress fitting, pre-marital counselling, hen’s party, the works. And then the actual wedding. It was a fascinating experience……for one it helped me understand the work my husband does. He does tv stuff for a living, so this was one way of me getting a quick education on certain things. It was fun getting to know the crew, they were great people.

But it was risky. Hugely risky in a lot of ways. We very quickly realized that the production company was focusing on our christian character. That was the thing that we knew could come across on the actual tv show as either God honouring and could give us a bit of depth and stability, or we could have come across as freaks and we could have been ridiculed across our entire nation.  In the end the shows were put together really well and our story came across with minimal freak factor represented…..probably helped by the fact that other participants in the show were people such as a nudist couple and some other rather colourful characters…

As time went on we learnt that the episodes featuring little old us, were the highest rating shows of the whole series. And here’s the point of this whole post……story. Our story had appeal. People; complete strangers, were interested in what we had to say about love and sex and marriage. It was more than nosey parker people, wanting a peek at a pretty dress and wanting a laugh at these people who were sharing way too much information. People talked about us at their workplaces, giving christian friends opportunities to join in the discussion too. People recognized us, in the most random places, and not once were we made fun of. Our story was respected I think because we had given people food for thought. Not because ‘we’re all that’. Not at all. Not because we’re amazing at all, no, we’re not, but our God is. God used our story for good. God shone through as the hero. We only had to take the risk we did, in sharing our story.

Your story matters too. Whatever it is that God has brought you through, whatever He is teaching you, that matters. Let’s not hesitate in sharing our stories because you never know what someone needs to hear. You never know what struggles those around you are facing. Our job is to plant the seeds, to be available, to be the ones who say ‘yes’ to whatever crazy God idea that comes before us. Then it is up to God to water that seed, to grow that seed. And He has a track record for doing that. Every. Single. Time.

Part of our story did involve lights, cameras and a bit of action. It goes to show that God uses many ways in reaching people. In sharing stories. And the exciting thing is….there are always more stories……we are all works in progress…. 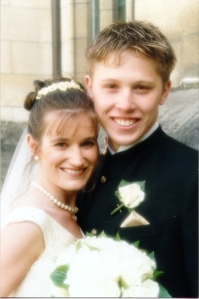