I love watching people.  I’m a people watcher from way back.  I may look all busy and all preoccupied, but that’s all part of my deep cover.  I’m watching.  And I’m listening. Seriously, despite how it sounds, its not a stalker thing at all, I just watch and listen to learn because I have so much to learn, from you.  And from everyone.

Recently I was sitting at an event where I noticed that the people there seemed to be listening really intently to what was being spoken. And they seemed to be leaning in, a little more earnestly than normal. And it was all very captivating.

What was being spoken all centered around ‘story’, specifically God stories, and it reminded me of how much people love stories and how we all appreciate it when people can and do share a little piece of their hearts with us, and it made me start to wonder about how God stories come about.  What are the essential ingredients to God stories?  Whether they are past, current or ongoing/ unfolding God stories- what is needed for them to exist?  Well that’s kind of a round-about thing isn’t it?  Because I believe they are constantly forming around us, because God is constantly there.  He’s already in our todays, as He was in our yesterdays and we have a blessed assurance that He’ll be in our tomorrows.  But what’s the thing that makes something that He’s doing in and through us, into something worth sharing, something that highlights just how powerful He is and can be an living, breathing example of his lavish love and grace for us?

I believe one of those things is ‘noticing’.

Noticing.  Having eyes to see. I’m learning that it’s not rocket science.  It is something we can all do. Noticing that God is at work.  Noticing needs around us.  Noticing where we can make a difference.  But this ‘noticing’, it really helps if it is paired with some action.

My Jesus was one who noticed things.  While walking with his buddies in a massive swell of people, he noticed when a lady who really needed healing, touched the edge of his garment.  He noticed her need, her desperation.  He noticed her plea, and he responded.  He spoke to her, and healed her.

When Jesus made a personal visit to a friend’s house, He noticed who was intent on just sitting and being with Him. He also noticed who was running around like a headless chicken to do all the work, and He responded.  And He suggested that she take a bit of a chill pill and learn what it is to just be.  (Something we can all do better at?) (Paraphrasing all totally mine).

Noticing and doing.  Seeing a need, a desire, something that needed to change, and this was accompanied by an action.  Jesus was constantly doing this, and I think we’re called to do the same.

When I lift my eyes up and above my own circumstances and forget about the things that wear me out and weigh me down, that’s when I start to notice things that I think may make a tiny difference in someone else’s life.

The other day I was walking from my office space to the post office, something I do at least twice a week, and on this particular occasion I happened to notice that the little cafe I walk past was closed.  ‘Weird’ I thought to myself, as that little place is always open in normal work hours.  The next time I was walking by I popped in to say hi to the owner of the cafe, and I casually asked her why she had been closed.  Well that prompted quite the flow of information involving her beloved dog, a gross medical condition (for the dog, not the owner) and an operation (once again, for the dog, not the owner).  It only took a few minutes out of my day, but it opened up a whole new avenue, because you know what I did the very next time I walked past?  Of course I stopped by to ask how the dog was recovering.  And now I have a point of contact where conversation can flow from that initial noticing.

Now I’m the first to admit that my people skills are ever-evolving and I miss so many opportunities in front of me, because I’m too engrossed in my own life or I’m too tired to respond to situations – but I’m praying that God will make my eyes ever alert to things I should be noticing – because that’s where heart connections are made and that’s where His spotlight of hope and fingerprints of grace can leave real soul-deep prints.  How do I know this? Because of how I’ve felt when others have noticed something in me.

I know what it is when I’ve received encouragement at just the right time.  Or when something I’ve said or done has meant something to someone else.  Once again – it’s never rocket science.  It doesn’t always have to be deep and meaningful, only sincere and honest.  Just two days ago a friend of mine mentioned to me in passing that she’d thought of me that morning.  She’d been reading a news article about student loans, and she’d thought of me and of the fact I’m working hard to do something about my loan.  It wasn’t a gushy statement, it wasn’t flowery and accompanied by rainbows and unicorns, it was simply a ‘I see you, I notice you’ and accompanied by an ‘I’m going to acknowledge you’. And flip.  That really meant something to me then, and it still means something to me now, and I have a sneaky suspicion it will mean something to me for a while.

It goes a long way.  It creates God stories – because it shows God as the Hero.  I’m positive that God prompted me to look up and at the ‘closed’ sign on that cafe as I walked past it the other day, and He prompted me to step inside and initiate that wee conversation with the owner.  In my own strength I’d much rather be thinking of what I next needed to be doing.  Or wanting a coffee.  Yes, coffee.  And it was God who plopped my name in my friend’s mind while she was reading that article, and it was God who prompted her to just give me that wee bit of encouragement.  She could have talked to so many other people at that time, yet it was me she was chatting to and me that was on her mind.

Noticing and doing.  Let’s be noticers and doers.  That’s gonna prompt some more stories, and who doesn’t like a good story? 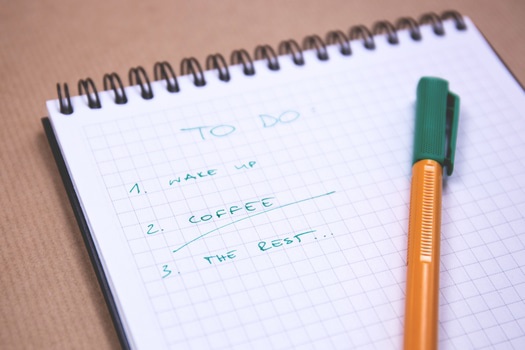